The pictures were gut wrenching. This week the chapel at Virginia Theological Seminary burned down and as the story broke, Facebook and Twitter were abuzz with the (heart) breaking news. Fortunately no one was hurt and, of course, the Church is not about buildings — the gospel transcends even the most sacred places.

But, still, this kind of devastation and loss hurts. As people of faith we are rooted to sacred space and holy ground. And for many generations of future clergy the chapel at VTS was at the heart of their seminary experience. A place where they sought God; a place of inspiration and prayer and song and hope. A  place where they brought questions and sought solace and strength; a place where the soul was laid bare and offered to God in all its humanity. A place where God was made manifest and Jesus was met again and again.

And while my initial reaction was “that’s what you get when you let low churchmen play with thuribles,” I also know the pain of losing the spiritual center of a seminary. The transition of my own alma mater, Seabury-Western, away from the residential three-year Master of Divinity program meant that I would never again be able to return to the chapel. I had always dreamed of one day celebrating the holy mysteries at the altar of the chapel of St. John the Divine. And it will never happen. As part of a deal with Northwestern University, the seminary gave the campus back to pay off its debts. 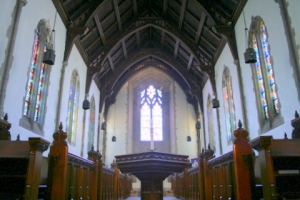 The seminary can argue that it is now “leaner and meaner” without such encumbrances but the place will never be the same. They sold their heart. Because make no mistake — the chapel was the true heart of Seabury. It is where we worshipped three times a day, responding to the bells announcing worship like Pavlovian-trained dogs. I have never felt more spiritually rooted and plugged in than I did in the midst of that community. And, though less dramatic than a fire, the loss is no less devastating.

So my prayers go out to the current seminary community in Alexandria and the many alums who are struggling to bear this emotional and spiritual wound. At VTS perhaps the words of The Great Commission famously displayed above a now destroyed large, iconic stained glass window never rang with such clarity and purpose: “Go ye into all the world and preach the gospel.”

My best friend from my seminary days was just called to be the rector of St. John’s in the Mountains in Stowe, Vermont. I encourage all of my clergy friends to accept calls to resort towns so that I can visit. It’s not working too well for me but this is a step in the right direction.

The Rev. Rick Swanson (who is also Ben’s godfather) has had a pretty varied vocational life to this point — he served as curate at a parish in California wine country, was an associate priest at a large church in Morristown, New Jersey, was the part-time rector for  4 1/2 years at a small church in Dowagiac, Michigan, and will be moving to Stowe next month.
Along the way he’s had some challenges but he has always remained faithful, above all else, to God’s call. Rick is a man of prayer, someone who has wrestled for years with a call to monastic life, though in the end he discerned that God was calling him to remain a parish priest. His new parishioners will be lucky — they’re getting a priest who loves Jesus Christ and is passionate about making God known through divine liturgy. He’s a creative, compelling, and thoughtful preacher and, more importantly given his new locale, he likes snow. 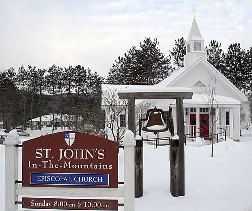 Being a native Minnesotan will do that to you I guess. He was also on the US Junior World speedskating team but he likes to keep that information under a bushel for some reason. So I always take great joy in telling people this and watching Rick blush. We put Rick’s speed to good use at seminary. He was the running back for our flag football team at Seabury-Western and we nearly beat the boys at Nashotah House in the annual Lavabo Bowl. This was quite the moral victory since they were all big young guys from the Diocese of Fort Worth (who else goes there these days?).
I wish Rick the best in the days ahead — I know the emotional energy it takes to leave a congregation. But I also know the excitement of being faithful to the call process. And the bunny hills of Stowe better be prepared to receive the Schenck family. We’re animals on those things.

From Seminary to Parish

Ten years ago I wrote a resource for graduating seminarians called From Seminary to Parish: Navigating Your First Clergy Job Search. It shot up the best-seller lists because graduating Episcopal seminarians are a HUGE nationwide market.

Actually, I had copies printed and it was distributed mostly through diocesan deployment officers. It made the rounds for a few years but then I stopped doing anything with it — parish ministry, life, etc. happened. The 60-page manual was a product of frustration; I wrote it as I was graduating from Seabury-Western because I couldn’t find anything that would take seminarians through the process of finding a first call. The goal was to produce an accessible, user-friendly, theologically-rooted guide. With a touch of humor, of course.

I handed a copy to my new curate-to-be Anne Emry after her visit to Hingham (and after extending a call I might add) and, after reading it, she suggested it was still very relevant. So I made some tweaks and have made it available as a free download in pdf form on my website. Thanks, Anne! And congrats on your graduation from Church Divinity School of the Pacific and impending ordination to the diaconate this Saturday at Grace Cathedral in San Francisco.

Feel free to get this to anyone you think might benefit and if you have any suggestions for making it more effective I’m open to hearing them. Of course I may not incorporate the changes for another decade or so.

In 2005 my friend David Knight’s parish, St. Patrick’s Episcopal Church in Long Beach, Mississippi, was completely leveled by Hurricane Katrina. As the church’s rector, this was obviously a defining moment in David’s priesthood. Beyond the immediate crisis ministry (which in many ways continues), the pertinent questions about the church’s future arose: Should we close the church? Should we rebuild? How would we fund a new building?

After much prayer the congregation, under David’s inspired leadership, chose to rebuild its “temple.” They have put together a compelling video of this process and I urge you to check it out. I’m not usually one to get all emotional over youtube videos (or movies or Hallmark ads for that matter). But this one (nearly) brought me to tears. It’s that powerful.

David reports that 93% of their parishioners (many of whom are still not back in their homes) have contributed to their capital building campaign. But they still need help. I bid you to join me in supporting their “$5,000 for 100″program, asking 5,000 people to contribute $100 each to the cause. You can donate by going to their homepage and clicking on the “donate” button.

David and his wife Jennifer lived two floors above us in seminary housing at Seabury-Western outside of Chicago. You will never meet two more prayerful, devoted, hilarious Christians. Their witness over the past several years has been an inspiration to me personally and to countless others. Please keep them and the people of St. Pat’s in your prayers.

As David recently wrote to me, “Working on this video has brought back to me, strong and sweet, bitter and exhausting, a lot of memories. It has been a tough 3 1/2 years for all of us. We are limping to the finish line, financially, and we still need help making it. I am weary yet God is faithful and the Spirit is strong with us. Soon and very soon we will celebrate; we have wept by the banks of the river in Babylon, indeed we have, yet we too shall soon return from exile.”

David and his wife Jennifer lived two floors above us in seminary housing at Seabury-Western outside of Chicago. You will never meet two more prayerful, devoted, hilarious Christians. Their witness over the past several years has been an inspiration to me personally and to countless others. Please keep them and the people of St. Pat’s in your prayers.

End of an Era

Tough news released by my alma mater today, Seabury-Western Theological Seminary, located in Evanston, Illinois. http://www.episcopal-life.org/79901_95159_ENG_HTM.htmEffective immediately, they will no longer be offering the three-year residential Master of Divinity program (the basic curriculum for training priests). While Seabury will continue in some form — they’re entering a period of discernment as to their future mission — no one will again have the same experiences that have formed, nurtured, and fed generations of future priests.

The bells which rang thrice daily to mark the communal prayers (Morning Prayer, Eucharist, Evensong) will be silenced. Long-standing traditions like the Lavabo Bowl (the annual flag football game between Seabury and Nashota House), the Boars Head Feast, and Awards Night will end. Lively informal refectory conversations, which nurtured me at least as much as the academic life, will cease.

For many of us, Seabury-Western http://www.seabury.edu/index.phphas become an integral part of our priesthoods. At its best, no seminary better prepared priests for parish ministry. I have a picture of the chapel — literally the heart and soul of the place — in my office alongside a picture of my graduating class. My first son, Benedict, was born the summer before my last year. He spent his first year of life as a community baby — going with me to chapel, classes, and the refectory. He was baptized by the then-dean Jim Lemler in Seabury Lounge. I served as Student Body President and have long been a passionate advocate of this very special place.

So I’m grieving this decision even as it may have been the only feasible one. I trust it wasn’t easy for the Board and current dean. The role and mission of seminary education is changing. I understand that. But it still hurts.